I received my order in like 3-4 days. I rate it - very fast. Printer came well packed. Some parts was little scratched, however everything clicked well, no problem assembling and filament was sealed and intact. Had to calibrate the printer and now it works like a charm. Thanks!
- Dave 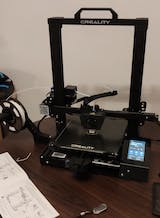 B
Bartlomiej Kuzniewski
A cheap opportunity to get ender-5, but only an experienced one will turn it into a printer.

Printer shipped from EU warehouse very fast.
Complete set - you can see that it has been repackaged, supplemented with all the elements as in the new printer (even a 200g roll of starter filament was included, brand new). There are traces of assembly on the mounting elements - but no damage was found.
Worse - you can see, unfortunately, why the printer was returned by the previous buyer. The quality of the assembly of elements - terrible:
- the square of the upper frame is not straight, placed on the table - one corner 1cm in the air, so quite crooked. Of course, it could be quickly repaired - it was enough to loosen all the places where aluminum profiles are mounted and twist them again, this time flat.
- carriages with Vslot rollers incorrectly assembled, except that with huge play - in some cases, wrongly fitted washers, which caused the roller bearings to rub against the nut.
- the PTFE tube was so tightly clamped with cable ties (holding the hotend cable) that the wire did not pass through these areas. The whole tube to be replaced, because it was deformed.
- electrical connectors from sensors - in both connectors there were poorly clamped plates on the wires, the cable could be pulled out of the plug housing, in which only the plates were left. After correcting (soldering the wires to the plates permanently), it works.
- extruder - plastic version, immediately exchangeable for metal or BMG
- "extrude in mm^3" option enabled by default, and bad extruder calibration in steps/mm (huge unterextrude effect, printout like mesh).

Summary: The printer is very good (more stable and stiff than ender3) but DEFINITELY only suitable for someone who is already familiar with printers and knows how to make it usable. There is nothing to expect that when assembled according to the instructions for a new printer - it will start printing correctly straight from the box. After correcting production errors, adding BMG and PEI table - it prints neatly. 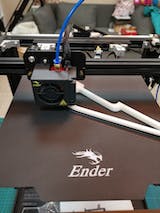 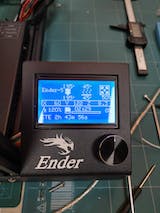 Buying a New household appliance was one oft my best ideas this year!!!

The delivery was very fast to Germany fast.
I can not see any used part for me this is brand new.