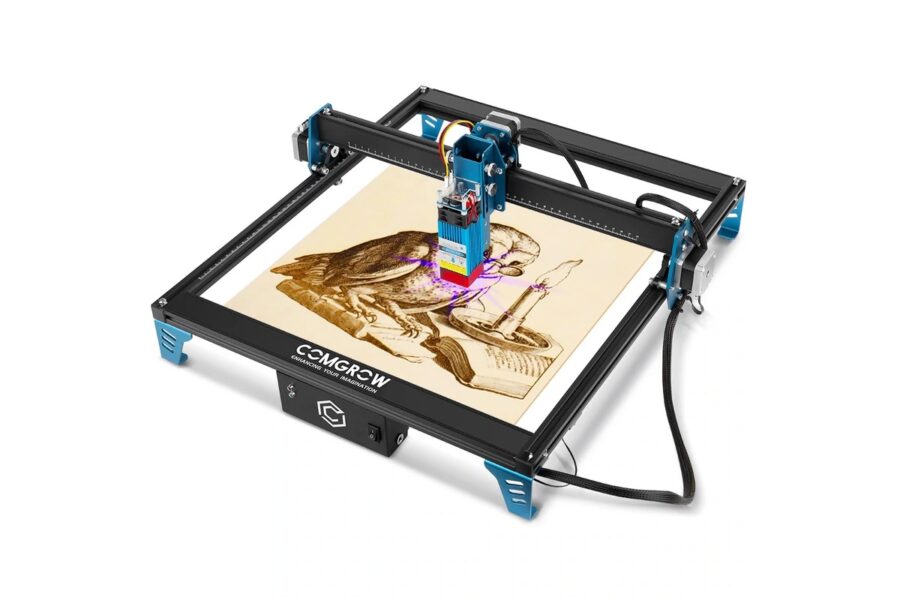 We got another laser engraver to test, this time a larger model for me too, the Comgo Z1. With some accessories...

Before the test report, the most important thing: 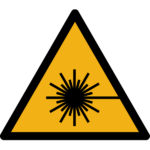 Warning! Lasers are not toys!

The device shown here has a performance that is at least 1000 times higher than that of laser pointers! Danger of permanent eye damage up to blindness! Fire hazard! Only to be used by trained personnel with suitable protective equipment at suitable workplaces!

The above warning is to be taken seriously, especially due to the following properties and peculiarities of the device:

- It has no housing, certainly not laser-tight, as is usual in higher price ranges.
– It is free-standing and does not have an integrated fireproof base.
– Only the green so-called laser safety goggles that are common with China devices are included, which in my opinion do not deserve the name. So first you have to get a decent one that is actually designed to protect against the wavelength used of around 445nm. E.g. Uvex sure has something...

Even with the best safety goggles, you must never look into the laser beam.

The reflections of the beam are no less dangerous!

Never even connect to the power supply or the computer without protective goggles!

Use at your own risk!

The Comgo Z1 was provided to us by Comgrow.

First the technical data according to the manufacturer, translation by me:

A few more basic pieces of information that apply here, as with most laser engravers in this price range:

– Operation only with a permanent connection via USB to the computer.
– No SD card or USB stick can be used.
– No control options on the device: no buttons, no display, nothing except the power switch.
– No mobile Z-axis , only manually adjustable.
– The  firmware is GRBL, on which the well-known Marlin is based.
– Instead of a slicer, a gCode streamer is required, which converts the source files appropriately and sends the commands directly to the machine via USB.

There are basically three operating modes:

– Line/pixel engraving in shades of grey, or rasterized, this is relatively slow and, to put it bluntly, looks like a dot matrix printer from the last millennium.

– Engraving vector graphics or text is quick, sharp and precise, as only the outlines are traced as continuous lines.

– Cutting certain materials if you reduce the speed, set the maximum laser power and follow the contours several times if necessary.

I carried out my tests under macOS with the commercial software LightBurn , which can be tested free of charge for 30 days. These are also available for Windows PCs, but the free LaserGRBL program is often used there. The latter is included on the included SD card, for the former at least the manual. Also to be found there: a few FAQs on troubleshooting and some laser-compatible image files. 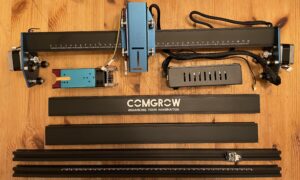 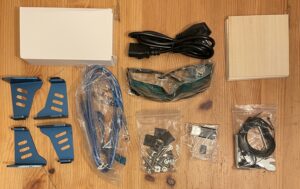 The scope of delivery, including the fully assembled X-axis . 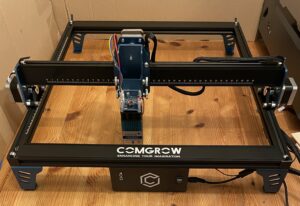 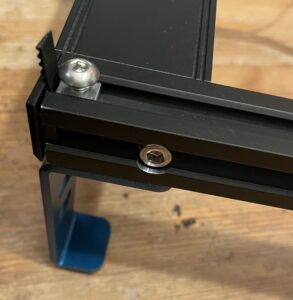 Can be assembled by advanced users in about an hour despite the lousy instructions.
A little bit of material everywhere, but it's enough. 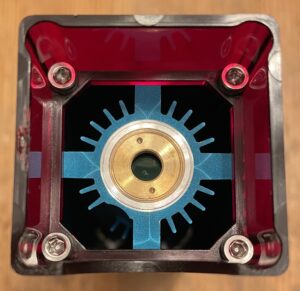 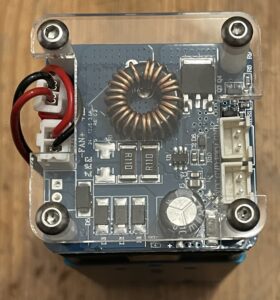 From above: the control board, a constant current source adjustable via PWM.
The Z slide screwed to the laser module. 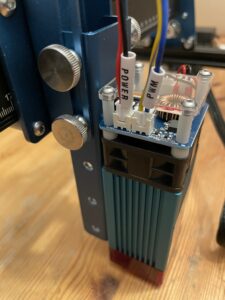 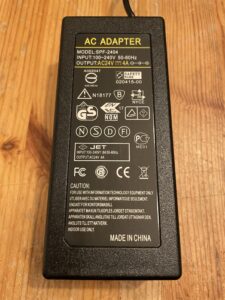 The laser is already mounted on the X/Z slide. The four necessary knurled screws are impractical.
The desktop power supply of my model even has twice the power as specified in the technical data. 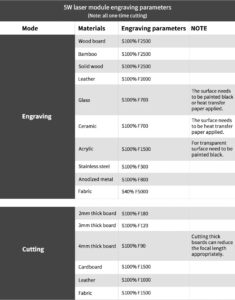 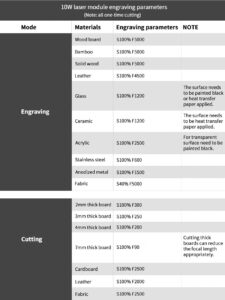 Somewhere at Comgrow I found these parameters for engraving and cutting different materials with the 5W laser.
And also those of the optional 10W model. 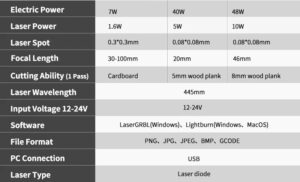 A comparison table of what appears to be three possible laser modules, fortunately the weakest was not included.
The 10W module actually has the same structure, just longer. 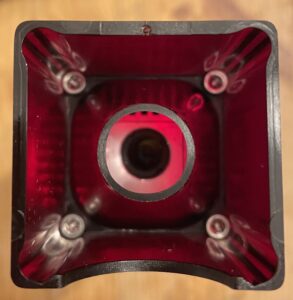 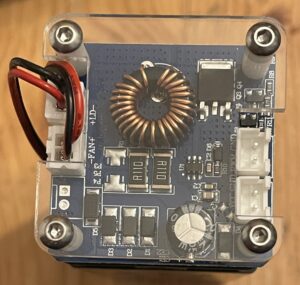 The 10W module from below: the lens hood and thus the focus distance is significantly longer.
From above: the same circuit board as the 5W model. 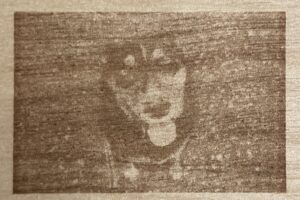 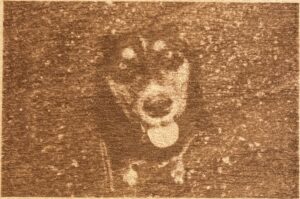 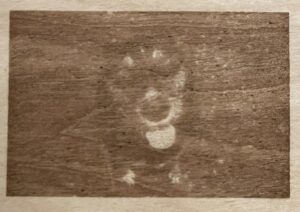 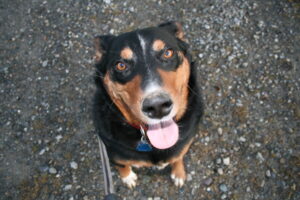 The 10W module, on the other hand, is powerful enough and the image has a much finer resolution.
The original image of Stephan's dog is also very low in contrast, which is why I like to use it for the laser test. 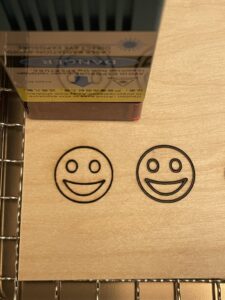 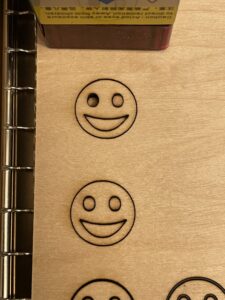 The 5W laser quickly gets out of focus if you don't have the module very close to the object. With the right smiley, there is only 2 mm more distance.
The lines quickly char, especially when cutting (top smiley). 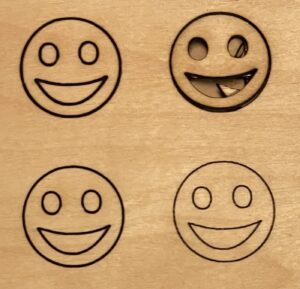 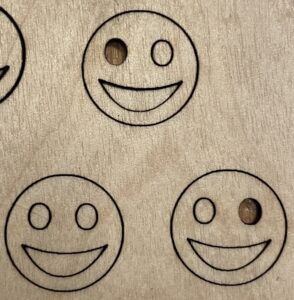 It looks much better with the 10W laser module.
You can cut 1.5 mm thick birch plywood that finely after only a short experiment. 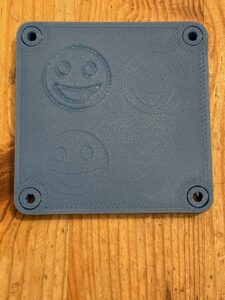 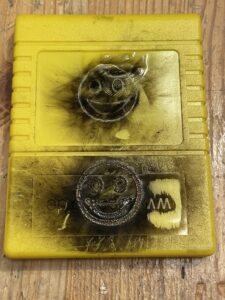 Printed PLA /PHA can be engraved, but you need the 10W module for that.
With commercial injection molded objects made of ABS , you only generate a lot of stench and traces of smoke.

Comgrow's Comgo Z1 laser has a large work surface of 400mm x 400mm and the laser module can be manually adjusted in height by about 10 cm, so it is one of the larger representatives.

It's nice that the X - axis is completely pre-assembled, that saves a lot of work, the " Z-axis " is already attached to it. The rest is screwed together quite quickly, all in all it takes less than an hour.

If the instructions weren't so bad, it would be much faster. You just can't see anything there. Experience with instructions from LEGO or IKEA may be helpful.

The frame and feet and the number of screws used are a bit minimalistic, but adequate, as there isn't a lot of weight being wheeled around particularly quickly. Fixing the ends of the Y toothed belts is simple, but solved well and stably. I have no burrs or inaccuracies to complain about.

Adjusting the height of the laser module above the object is very impractical, as only the four knurled screws hold the module on the X-axis mount. The 105 mm long holes there are too wide, you can never be sure that the module is really vertical. And you have to move the screws so that you can use the full length.

The scope of delivery is minimal, but at least a couple of nice test boards with a size of 10 x 10 cm^2 are included.

The 10W module is flawless.

And really about twice as powerful as the 5W from the Atomstack. The best focusing is achieved at approx. 5-6 mm above the object to be processed. But the distance is not as critical as the 5W module, although this is also a non-adjustable fixed focus.

Engraving PLA/PHA:
Only clearly recognizable when reduced to 1000 mm/s. No discoloration!

Cutting ABS:
Impractical as it melts and chars too easily.

Non-transparent plastic and other materials can also be processed with it, but you just have to experiment. On metal you can at most achieve discoloration or burn in paints but no real engraving.

I haven't done any endurance tests either, so I can't say anything about how long the module will last. But Stephan has had some very sobering experiences. These are just simple hobby devices...

A fireproof base under the object should not be forgotten, nothing of the kind is included. A laser grid directly above it also makes sense, see Stephan's test of the honeycomb panel here.

The lens hood at the lower end of the laser is quite nice and can perhaps also prevent the (reflected) laser beam from escaping to the side, but only if the head is very close to the object, but that's not enough. They can therefore in no way replace decent laser safety goggles!

An Air Assist, i.e. a blower in the direction of the laser point, would make sense, but unfortunately it has only been implemented rudimentarily and not really effectively in the design of the aluminum block of the laser module. That would reduce scorching.

The GRBL 1.x firmware is correctly configured, and the installation space is also correct, which unfortunately cannot be taken for granted.

The machine even has limit switches for X and Y at 0/0, so you can home and thus approach absolute coordinates if you really want to. OK, for absolute machine zero it makes perfect sense.

The X and Y rulers on the frame are nice.

Very important, but unfortunately not a matter of course: the laser stays off when switched on or connected to the PC. There is indeed a mechanical on/off switch on the unit, but of course it only switches the secondary voltage, so the power supply is always on.

The automatic laser switch-off when the device is tilted by more than approx. 20 degrees is not built into the laser module as part of the hardware!

It only works (if at all) if the software on the computer is aware of it. I didn't test that because I don't think that approach is an option for such a critical function. With the Atomstack P7, the switch-off function was implemented directly in the laser module, exemplary!

An interesting and unusual solution is the possibility of updating the firmware via a µSD card, see here.

With the 10W laser module, this is a thoroughly usable device with a large work surface without any major flaws, apart from the almost complete lack of safety equipment, which you absolutely have to take care of yourself.