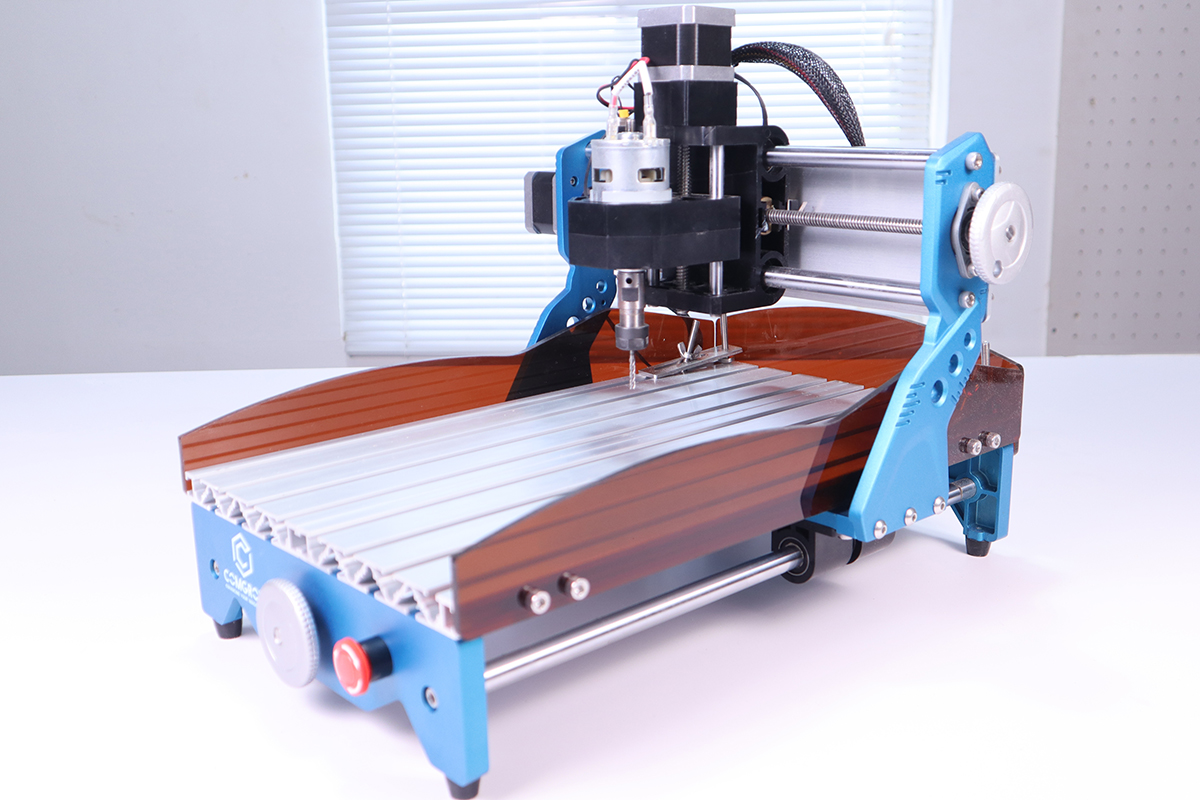 It is a compact 3018 CNC router machine that can fit on top of your desk that is ideal for engraving materials like wood, MDF, plastic, and acrylic.

ROBO can double up as a laser engraver if you get the laser attachment provided by Comgrow.

In this review, we take a deep dive into what this CNC router can do, including tests on multiple materials to help you understand its real-world performance.

Read this until the end to see how this CNC fared with different materials.

What's in this article? 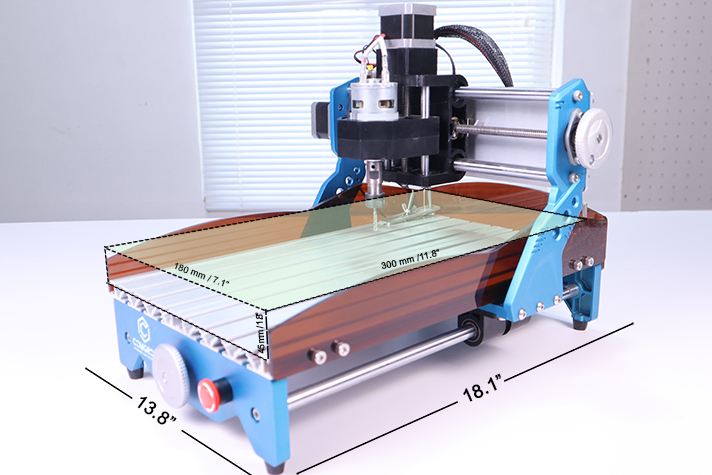 Unlike other 3018 CNC like the Genmitsu 3018 PROVer, ROBO CNC has a longer Y-axis than the X-axis.

Its work area is supported by the Y-axis aluminum base that has T-slots to attach clamps and vises to hold the work material. 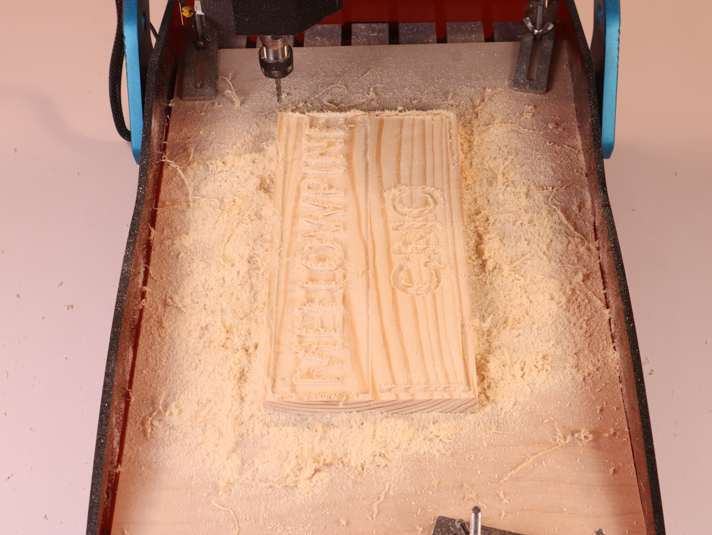 However, I pushed it to cut way harder than this without affecting the machine.

More about it on the However, I pushed it to cut way harder than this without affecting the machine. 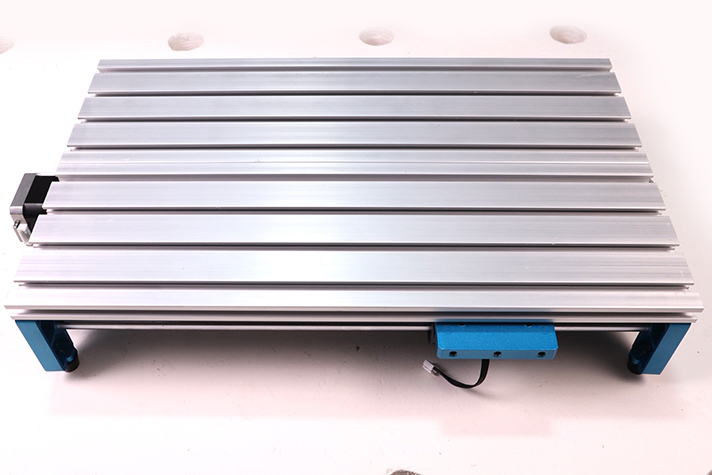 Comgrow has used a frame made of aluminum alloy for ROBO CNC that makes it quite rigid for a 3018 CNC.

The machine is small and has four rubber feet attached to the bottom. It helps reduce the noise and vibration while milling.

The Z-axis assembly and motor mount is made of ABS which makes it light but at the same time rigid.

Overall, it has good rigidity and is easy to install and maintain. 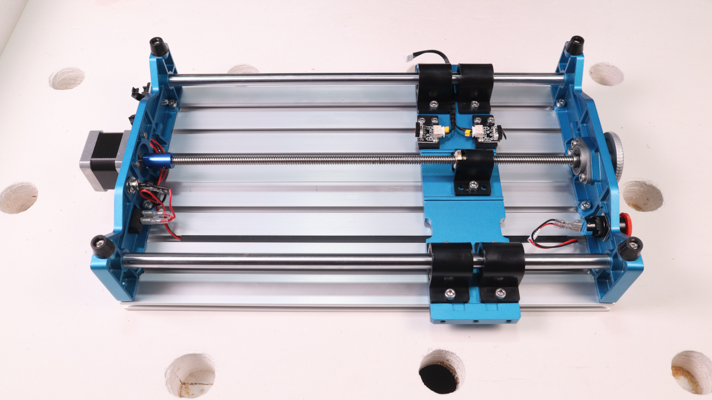 ROBO CNC is lead-screw-driven on all three axes.

Along each X and Y axis, the machine uses two 0.47" (12mm) linear rods to support the machine movement.

You can also control the X and the Y-axis manually by rotating the adjusting knob. It will be helpful to make some small adjustments.

However, there is no manual adjustment for the Z-axis which would have been a nice addition as you need to depend on the controller or computer for moving the Z-axis all the time. 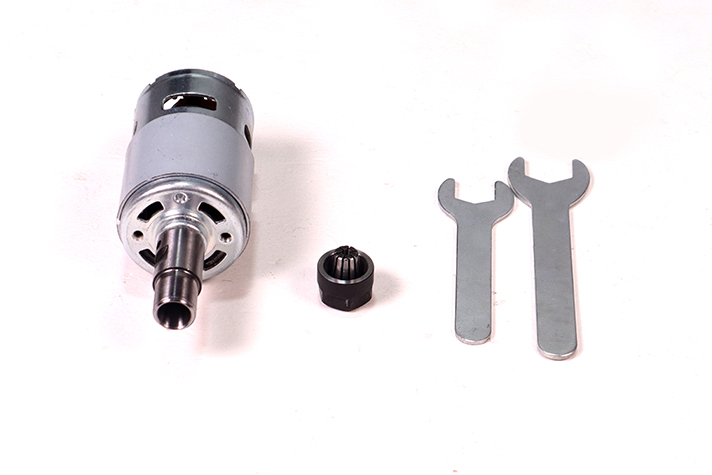 Spindle with ER11 collet and wrenches

ROBO CNC router comes with a standard 60W 775 spindle, which has a speed of 10,000 RPM. You can control the RPM using the GRBL Candle control software.

The spindle has a heat dissipation fan to help it run for long hours of operation. I was able to run it for around 2 hours without stopping and there was no heating issues.

The spindle is underpowered if you want to cut hardwood but it performs well for engraving on most materials I tried. It even performed a decent 0.05" deep cut on soft pine wood.
ROBO CNC has a very rigid build compared to other 3018 CNC machines. The machine can be made powerful enough to engrave on aluminum with the right spindle upgrade.

I used a smartphone-based app for measuring the noise levels and it was around 75 dB, 2 to 3 feet away from the router while cutting pinewood at 5 ipm with a doc of 0.05" and the spindle running at 10,000 RPM.

At about three yards it's quieter than a dot matrix printer. You can use it in your home without any worries if you keep the door to the room closed. 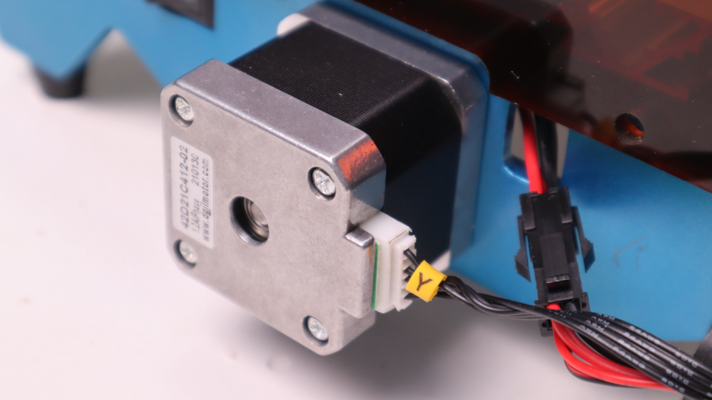 The lead screws along the axes are driven by stepper motors, each having a holding torque of 67.97 oz-in. 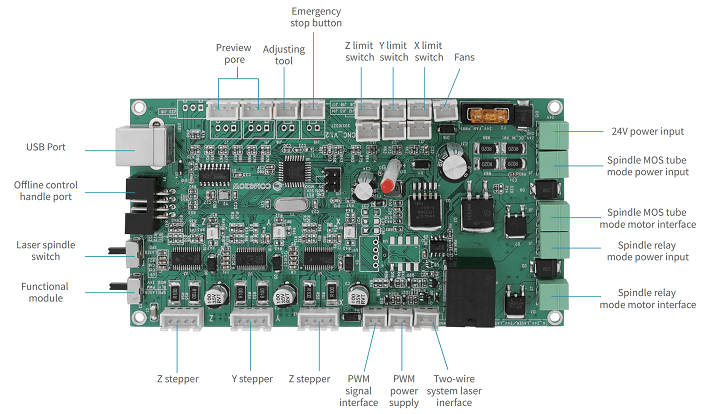 ROBO CNC uses a three-axis Arduino-based control board. The control board is placed in a black enclosure behind the X-axis gantry.

For homing operations, ROBO CNC uses a total of six limit switches, two for each axis.

It uses an offline controller which lets you engrave and cut without a PC. You can also connect ROBO CNC to a PC using a USB cable.

When not using the offline controller, it can be hung in the back of the electronic enclosure. It will stay there and not move around when the machine is milling.

You can load the G-code file to the offline controller using an SD card. Then the loaded file can be selected using the control switches. 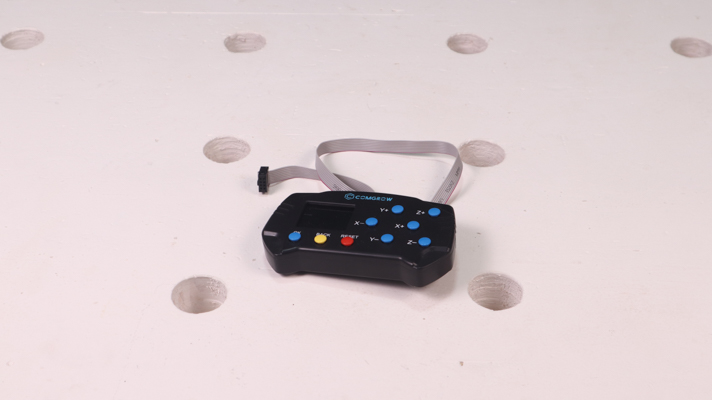 However, it is much more easier to control the machine using a computer rather than the offline controller.

Comgrow ROBO CNC has an E-stop switch at the front which you can use to stop the spindle and the movement of the axes if anything goes wrong. 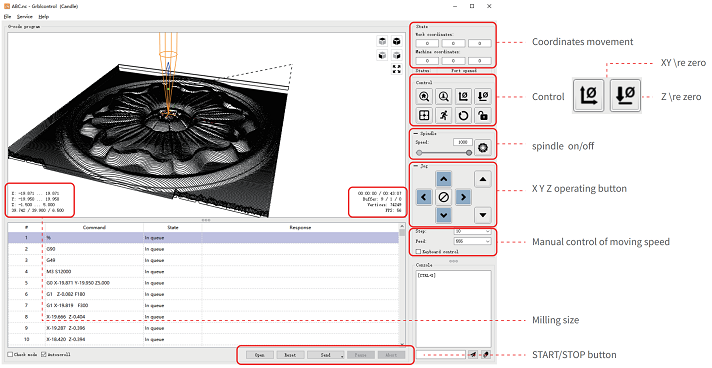 You can use any software of your choice like Fusion 360, Easel, Etc for CAD operations. They can also generate toolpaths.

LaserGRBL is available only for Windows OS, but LightBurn is compatible with Windows, Mac, and Linux OS.

For controlling the CNC, they provide a card reader and a memory stick that has test files, Laser grbl, and GRBL Candle loaded on to it.

It is a better idea to copy these files onto your computer than use it directly from the memory stick.

It can also work with Easel software, which is an all-in-one software package for CNC and can do CAD, CAM, and control operations from a single interface.

With the Comgrow ROBO CNC machine, you will get wrenches, clamps, power adapter, milling tool kit, tool holders, cables, screws, and a Z-probe.

The accessory kit contains 8 end mills, half of which are four flute 1/8" cutters and the other half are engraving bits with a 20° taper and 0.1 mm tip.

Since the Z-axis is not having a manual control knob, the Z-probe will help you easily zero the Z-axis. 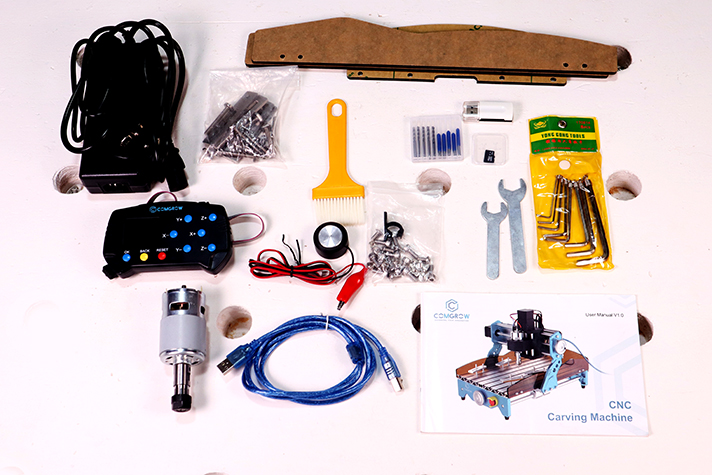 What's in the box with Comgrow ROBO CNC 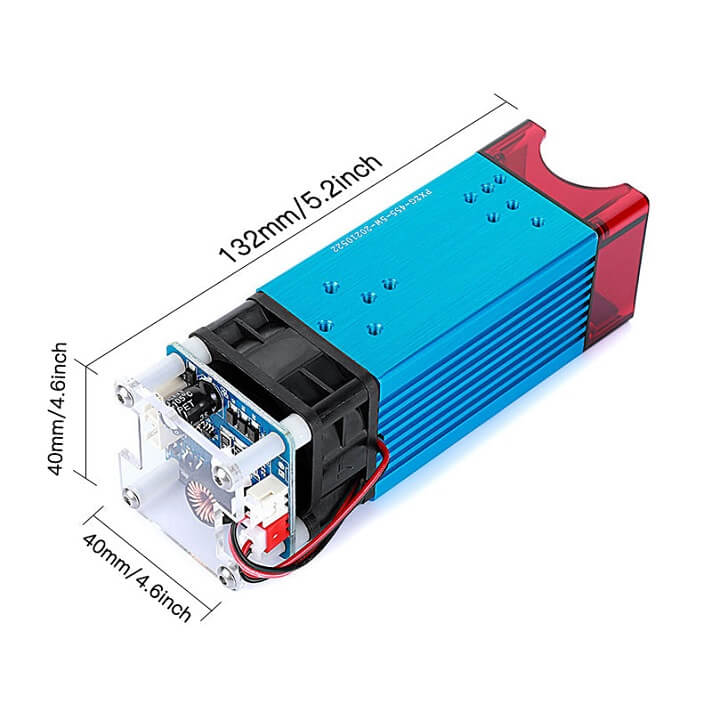 You can get your ROBO CNC customized with necessary laser upgrades while purchasing it from Comgrow's official website.

Even if you choose not to get any upgrades when you buy the machine, you can still purchase them later. 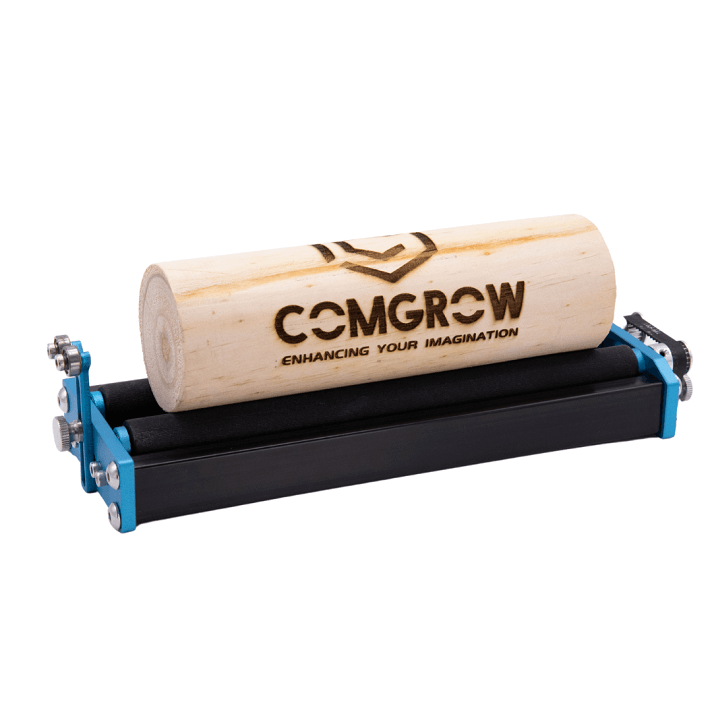 ROBO CNC comes in six modular parts. In addition, the X-axis and the Z-axis come pre-assembled.

There are three acrylic protective baffles that you need to attach to the edges of the workbed using two M5 bolts.

The next step is to place the X-axis gantry to the linear guide mounts with three screws.

You then need to fix the spindle onto the ABS spindle mount, after which you can connect all the cables.

All the cables are neatly marked and it is really easy to figure out which one goes where.

The connectors are designed in such a way that there is only one way to connect them so you don't have to worry about connecting them wrong.

The assembly manual has enough details to help you complete the assembly without trouble.

In case you get stuck during the assembly you can refer to several assembly videos on YouTube for help.

The connector for the Z-axis probe is a short cable poking its head out of the controller and was hiding behind the X-axis gantry.

When everything is connected, you can turn on the machine and try jogging it using the "Move" option in the offline controller or grbl Candle.

All in all the assembly will take you less than 20 minutes and you can start cutting within 30 mins of opening the box.

Comgrow has an active community on Facebook. They also run some fun giveaway challenges regularly for their customers on their Facebook page.

Their products are fairly affordable and are used by several people.

Comgrow has also compiled a ROBO CNC FAQ section on their website with frequently asked questions from their customers.

If you change your mind after ordering this machine, you will still be able to get a full refund for 30-days from the date of purchase.

Comgrow has a CNC guide section on its website. It details the assembly, software installation, machine operation, upgrade instructions, troubleshooting, and more.

We tested this CNC router on Acrylic and Pine.

I started off with a 3" x 6" piece of acrylic. Made the design using Adobe Illustrator and exported it as SVG.

Then I used Easel and imported the SVG file I made on Illustrator. You can also design directly on Easel, depending on which one you are comfortable with.

I used the engraving bit that came with the CNC and it did a decent job. 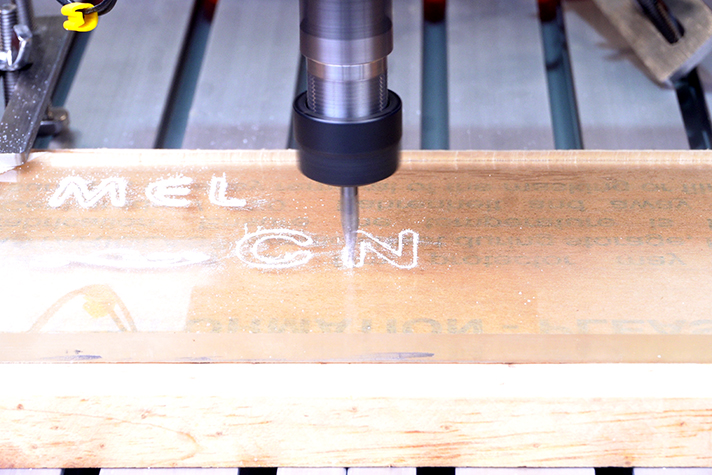 It was comfortable cutting at this speed and feed, there was no unwanted vibrations or whining of any sort. 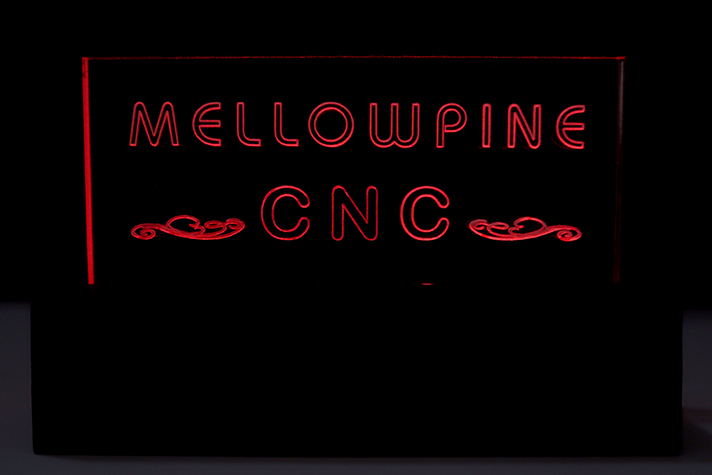 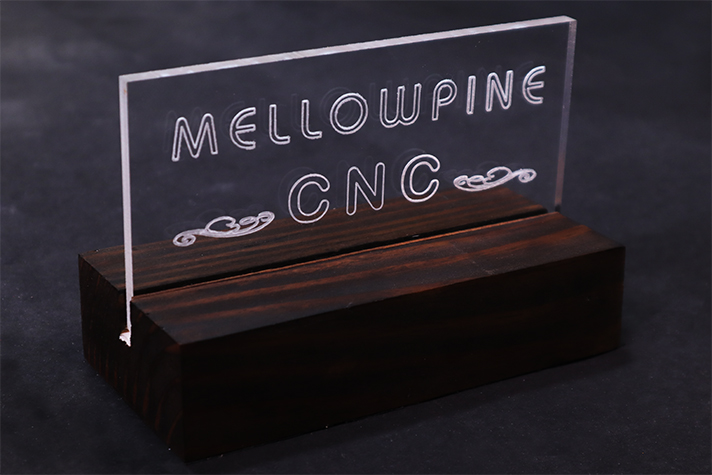 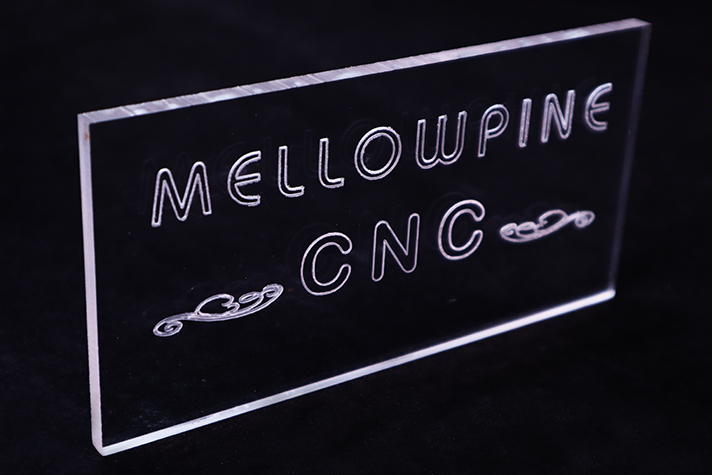 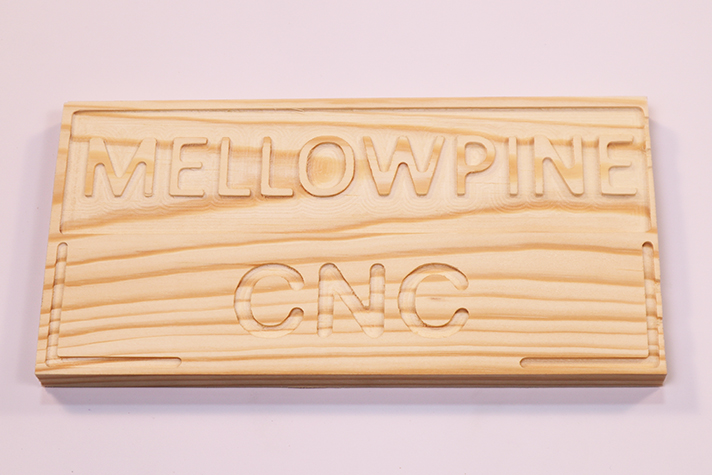 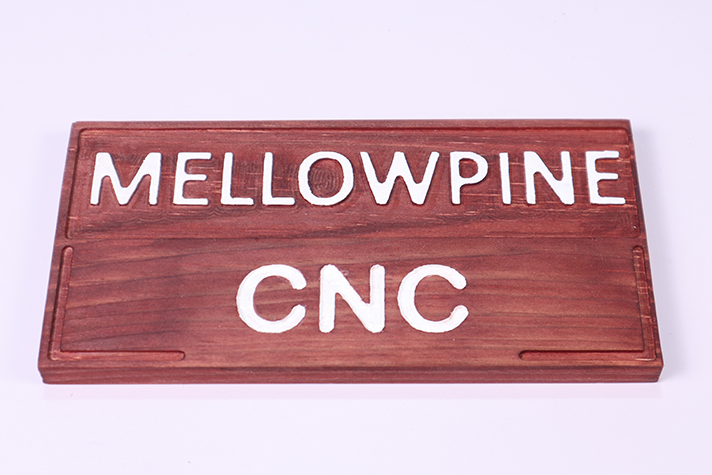 It was able to ramp it up to 6.25 ipm at 0.05 doc on pine wood, there was no struggle and it was evident that it could be pushed for a deeper depth of cut.

The entire process of cutting out the design took about 1 hour and 45 mins but I think the time could've been cut down a bit more to complete it 15 minutes faster.

It is a great starting machine for beginners and a useful tool for hobbyists.

The overall performance was great when we tested it on different materials.

Considering how rigid the machine is, you can even try a spindle upgrade to cut harder materials.

Overall, the ROBO CNC machine is a great option if you are looking for a 3018 CNC machine.

It comes with features like Z-probe, limit switches, offline control, protective baffle, etc that otherwise have to be bought separately in most other popular 3018 CNC machines.

From where should I buy ROBO CNC machine?

You can buy ROBO CNC machines from Comgrow's official website. It is genuine.

Sign up to get the latest on sales, new releases and more …